We have recently added a new tour to Borneo for 2015. Following a request from some of our regular customers this tour will take place in September visiting Mount Kinabalu, Sepilok, Kinabatangan River and finishing at Danum Valley with 4 nights at the fabulous Borneo Rainforest Lodge.

Our last morning’s birding in fabulous Ethiopia saw us back in Awash NP where we had a few hours before returning to Addis Ababa.

Highlights here included great views of a Gillett’s Lark singing from the top of an acacia, Grassland Pipit, Turkestan & Masked Shrikes and our final new bird was a stunningly beautiful Green-winged Pytilia – thanks to Christine. Other species noted included Bateleur, Buff-crested Bustard, the Hartlaub’s Bustard again, and a pair of close Chestnut-bellied Sandgrouse amongst others.

The drive back to Addis Ababa wasn’t too painful and along a new freeway we passed flocks of Common Cranes, some White Storks, a field full of Abdim’s Storks, and even a Great Spotted Cuckoo flew over. So that was it, and we arrived at our hotel at 4.30pm and enjoyed a relaxing evening after a hectic yet bird-filled tour before flying back home the following day.

Shortly after sunrise we were on the Aledeghe Plain and watching the first of 5 Arabian Bustards feeding quietly right out in this vast open wilderness, and with some careful positioning form our drivers we got ahead of one bird and it just kept walking towards us until only about 30 metres away! Probably the highlight was seeing one of these much-wanted bustards with a Northern Carmine Bee-eater riding on its back – an extraordinary sighting and my personal highlight of the whole tour. 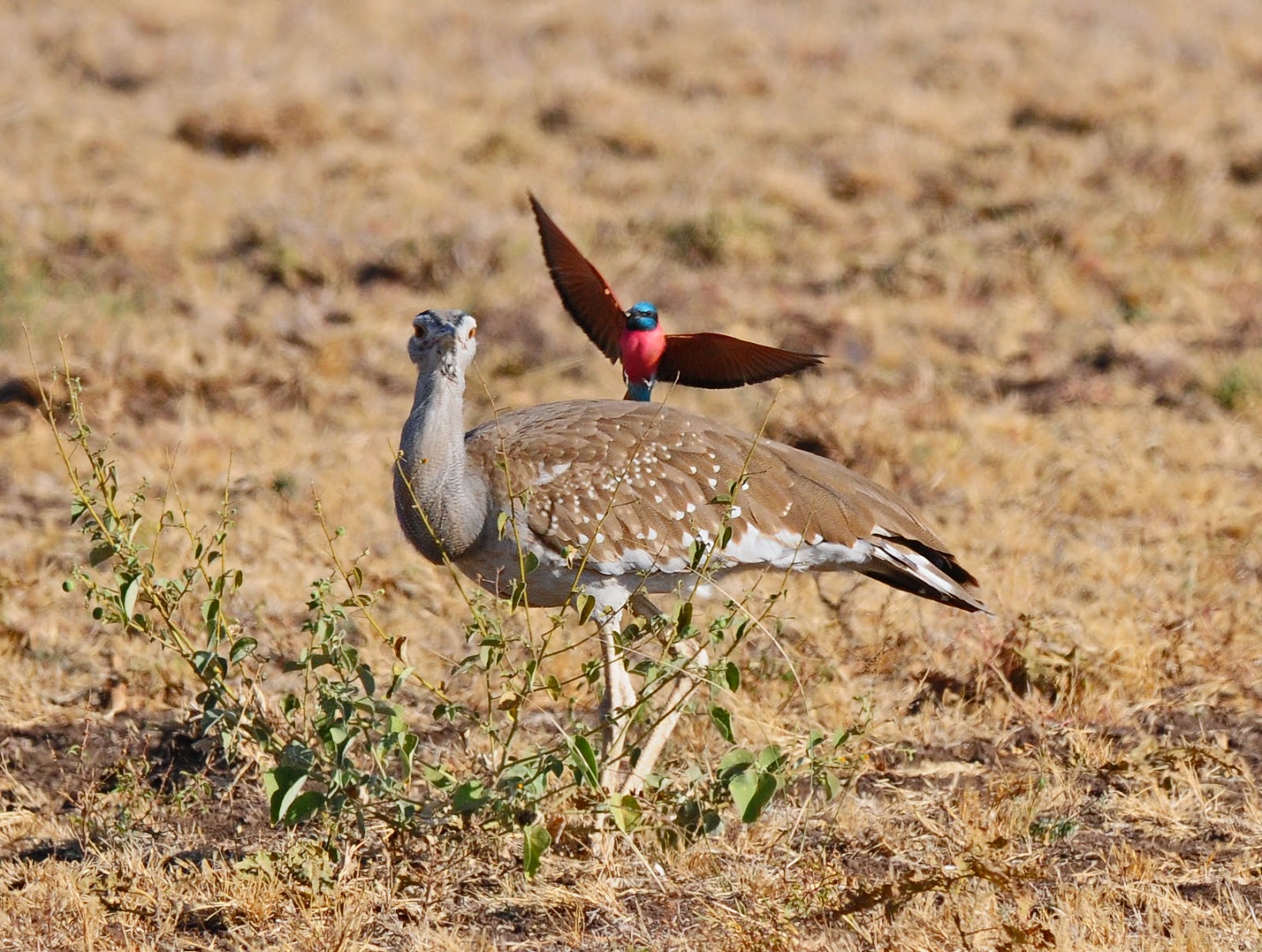 We were able to drive the cars closer and had amazing views once again and were able to observe them for quite some time. Many Chestnut-backed Sparrow-Larks were also present, along with White Stork, a couple of distant Secretarybirds, plus Soemmering’s Gazelle and Beisa Oryx.

We then drove the short distance to the Bilen Plain and the first bird we found was a pair of Yellow-breasted Barbets perched on top of an acacia, followed by a Tawny Pipit. Further on we took a short walk but it was getting really hot, however we did find several Nile Valley Sunbirds including one male still in breeding plumage which was something of a surprise. There was also a Black-cheeked Waxbill, Brubru, Blue-naped Mousebird and plenty of other birds in the vicinity.

We had a coffee at Bilen Lodge and saw yet more barbets, and a flock of Red-rumped Swallows on the wires here, but by now it was late morning and really hot. Returning to the hotel for lunch and a siesta we set out at 3.30pm for a drive in Awash NP but it was rather quiet. 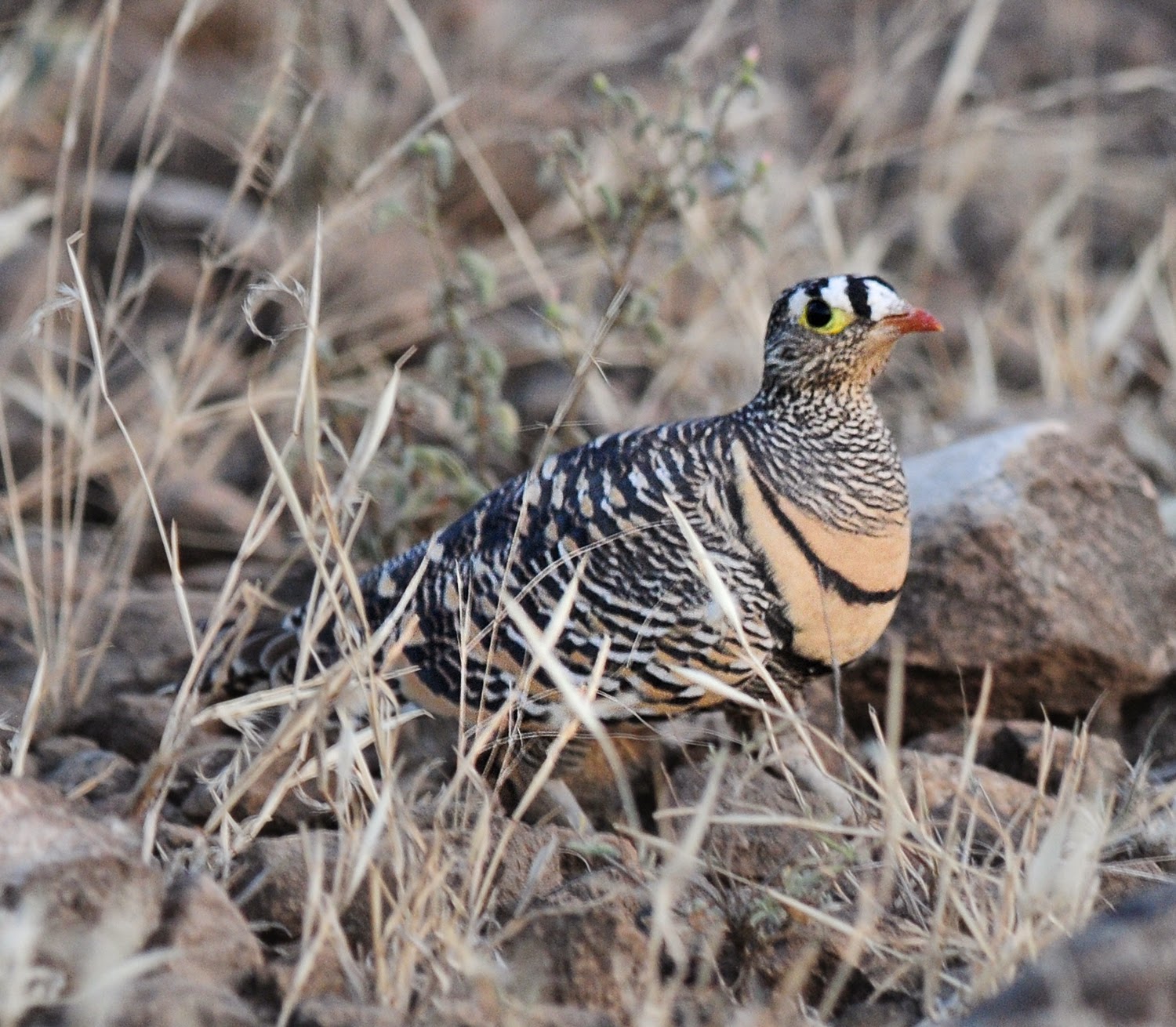 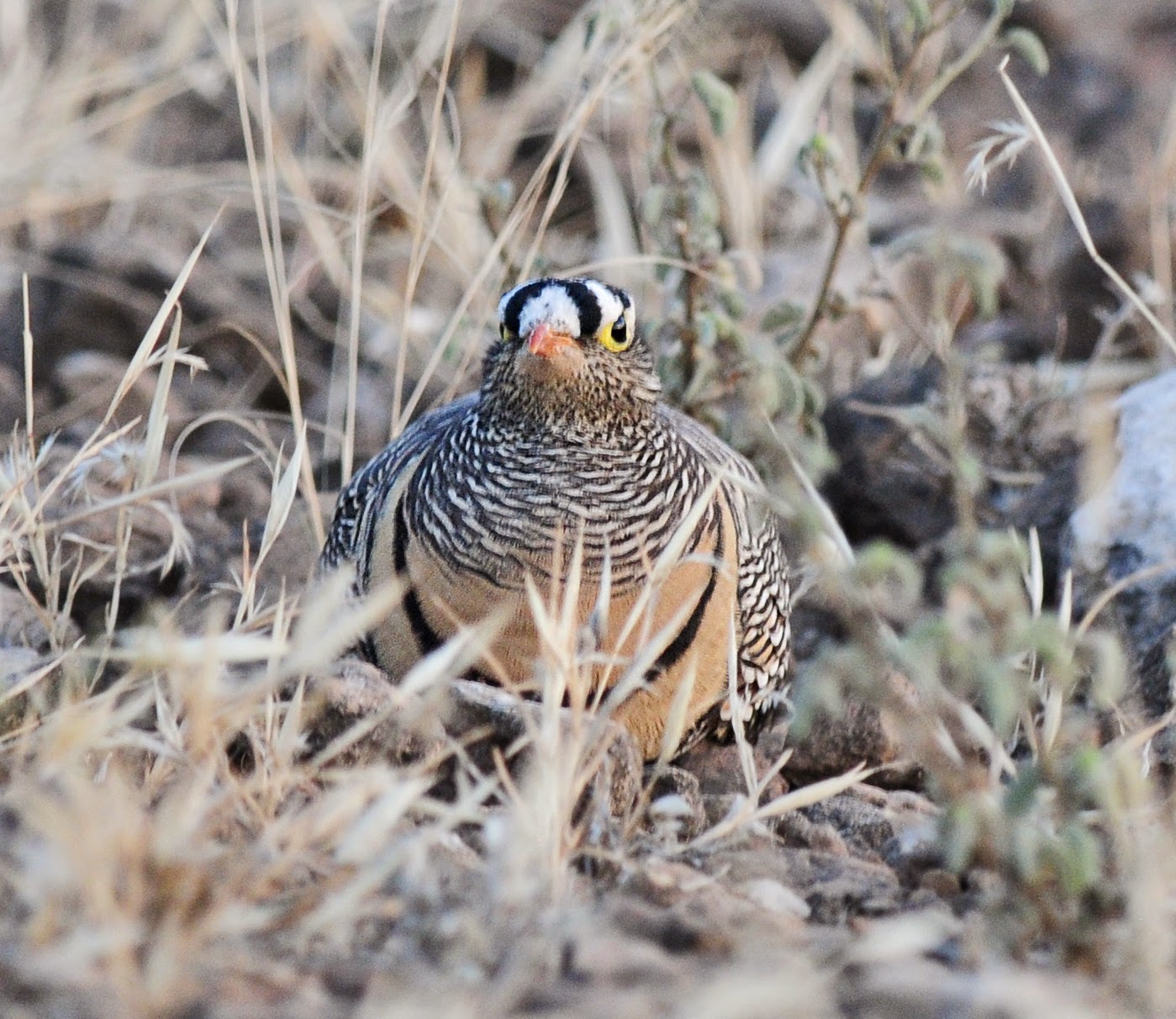 Although our first Red-fronted Warbler was overshadowed by 3 Lichtenstein’s Sandgrouse seen just before the light faded. Driving out we had a brief view of more Bat-eared Foxes beside he track.

Leaving Nazret early we reached the lava flow of the long dormant Fantale Crater volcano not too long after sunrise and it was still quite cool. Fortunately we managed to find the endemic Sombre Rock-Chat quite quickly and were treated to point-blank views of a pair perched on rocks right in front of us.

In the same vicinity were several Shining Sunbirds, a breeding Ruppell’s Weaver, Ethiopian Swallow and our first Purple Heron and African Palm Swifts. Checking out another site nearby and having our field breakfast proved to be a good move as the first of several Striolated Buntings appeared, followed by a pair of Chestnut-headed Sparrow-Larks. Nearby, there were a few Pied and Isabelline Wheatears, Steppe Grey Shrike, a perched Gabar Goshawk, flocks of Red-billed Quelea, Abyssinian Roller, and best of all a stonking Yellow-breasted Barbet.

Leaving here we drove to our hotel and enjoyed several hours siesta over the extreme heat of the midday period. Afterwards we drove through Awash National Park across the grassland seeing species such as Pygmy Falcon, Pallid Harrier, Somali Fiscals and other previously seen species. An Ashy Cisticola was new, as was Long-tailed Paradise-Whydah, flocks of Chestnut-backed Sparrow-Larks, Singing Bushlark, and an awesome Hartlaub’s Bustard patrolling the edge of the tall grass. Wow!

As it got dark we spent a very enjoyable hour spotlighting our was back across the park, and although initially we drew a blank we got our just rewards with a Greyish Eagle-Owl, Abyssinian Hare, another Common Genet and on the track right in front of us was a Star-spotted Nightjar that allowed an extraordinary close approach. What a bird! Then, as we drove back to the hotel a Bat-eared Fox was seen. What a day!

Nightbirds in the Daytime....

A bit of a crazy day today as we left the impressive Bishangari Lodge after a 6.30am breakfast, during which an African Pygmy Kingfisher was seen. We drove out along the 20kms of bumpy track towards the main road and had a Wahlberg’s Eagle and a Peregrine flying overhead. Once on the main road it didn’t take long to reach Abiata-Shalla National Park, where a walk through the acacia woodland resulted in our first Red-fronted Barbet and Bearded Woodpecker of the tour, as well as Rufous Chatterer and a few other previously seen species. Girum also played a blinder with the finding of a day roosting Slender-tailed Nightjar in the shade of some dense bushes.

From here we drove back down to the shores of Lake Langano where a Northern White-faced Scops-Owl was seen at another day roost, and we followed this with a Greyish Eagle-Owl in another lodge’s gardens!

At Lake Abiata the strong wind and poor light made our visit a little problematical, but as well as being amazed at the huge numbers of Greater and Lesser Flamingos at the lakes edge, we also found a small group of Cape Teal and some close Kittlitz’s Plovers here as well. Big flocks of Ruff, some Common Redshanks and a Ringed Plover were more familiar fayre to us, but there was also a distant Wattled Crane amongst the Common Cranes, African Sacred Ibis and others. We left here and drove to the large town of Nazret for the night.