There's not that many lodges in Asia that offer a feeding station in the gardens - in fact i'm struggling to think of any..! There has been around 250 species recorded in and around the lodge and extensive gardens and you can sit on the veranda sipping coffee watching some truly great birds feeding within arms length. During our stay we spent quite a while enjoying the garden birds and were rewarded with some excellent sightings.....

Upon reaching the excellent Jungle Lore Birding Lodge we barely had time to get our kit into the cottages before new birds appeared from everywhere and a fine lunch really got in the way! But at the feeding station below the veranda a flock of White-throated Laughingthrushes were joined by several Streaked Laughingthrushes, as well as groups of Russet Sparrows, along with a pair of Oriental Turtle-Doves, a superb Black-headed Jay, and a cracking Grey-winged Blackbird. 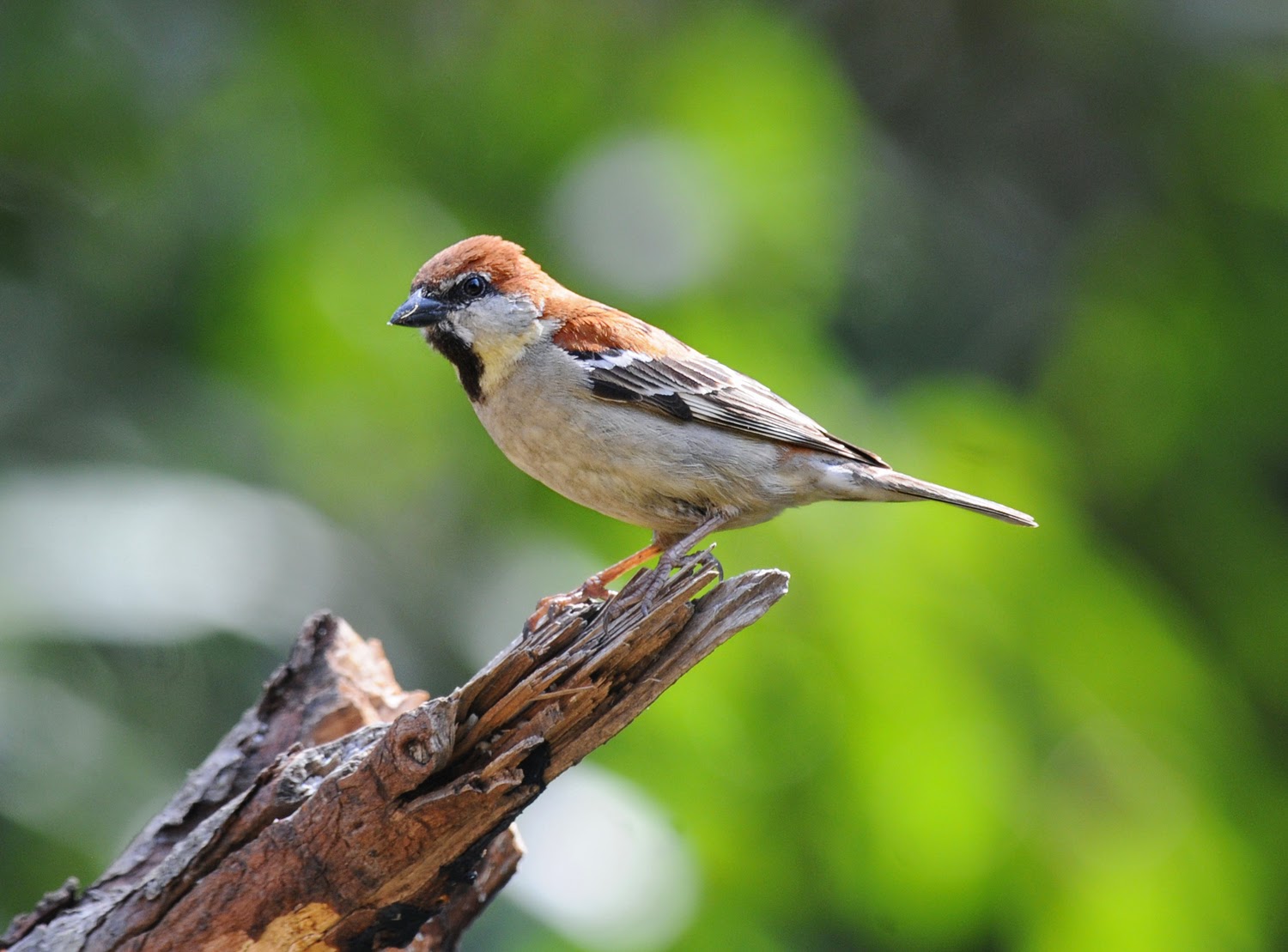 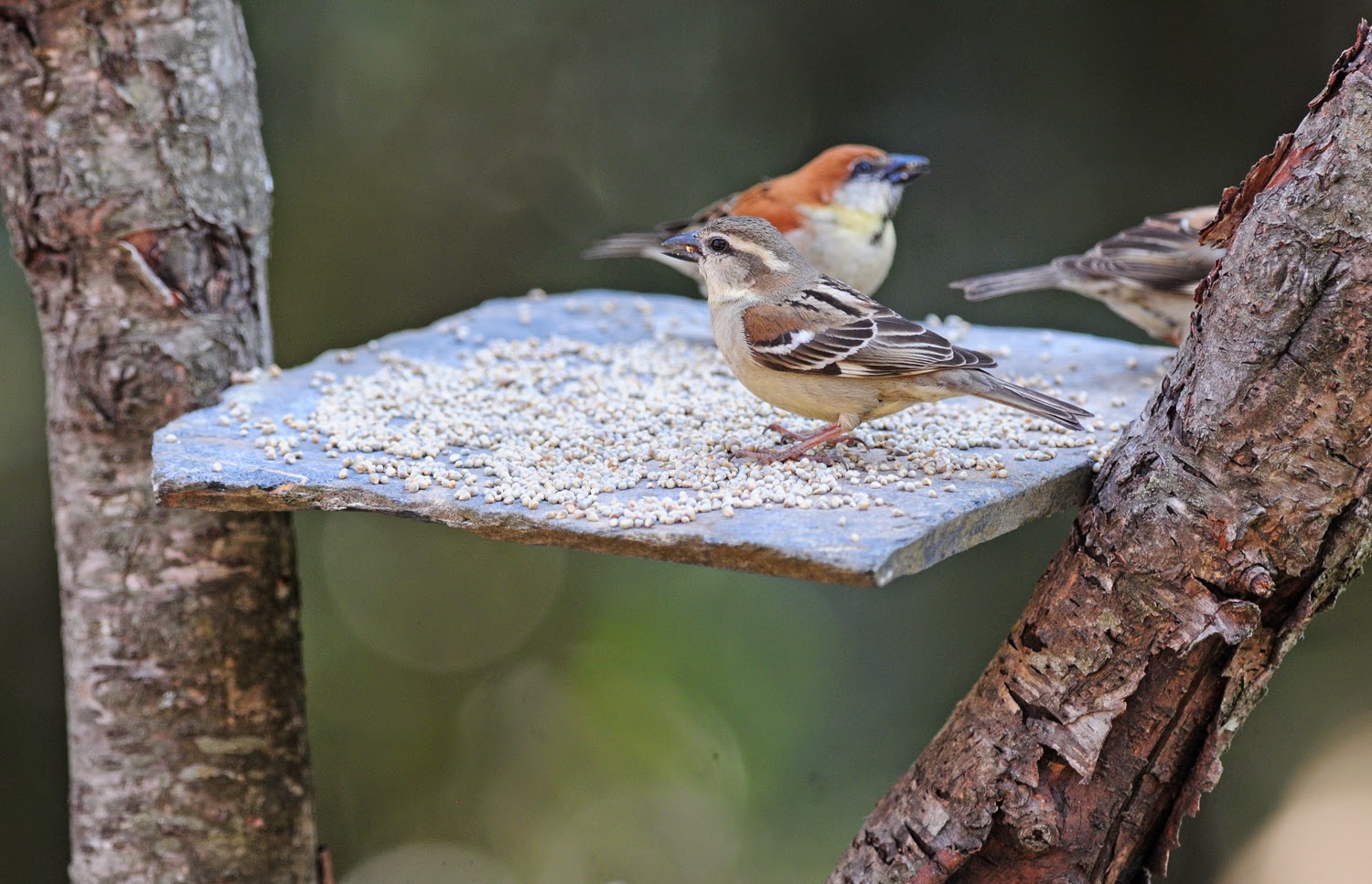 All of these birds were extremely close and confiding and it was a very unique experience to be able to study these birds at such close quarters. 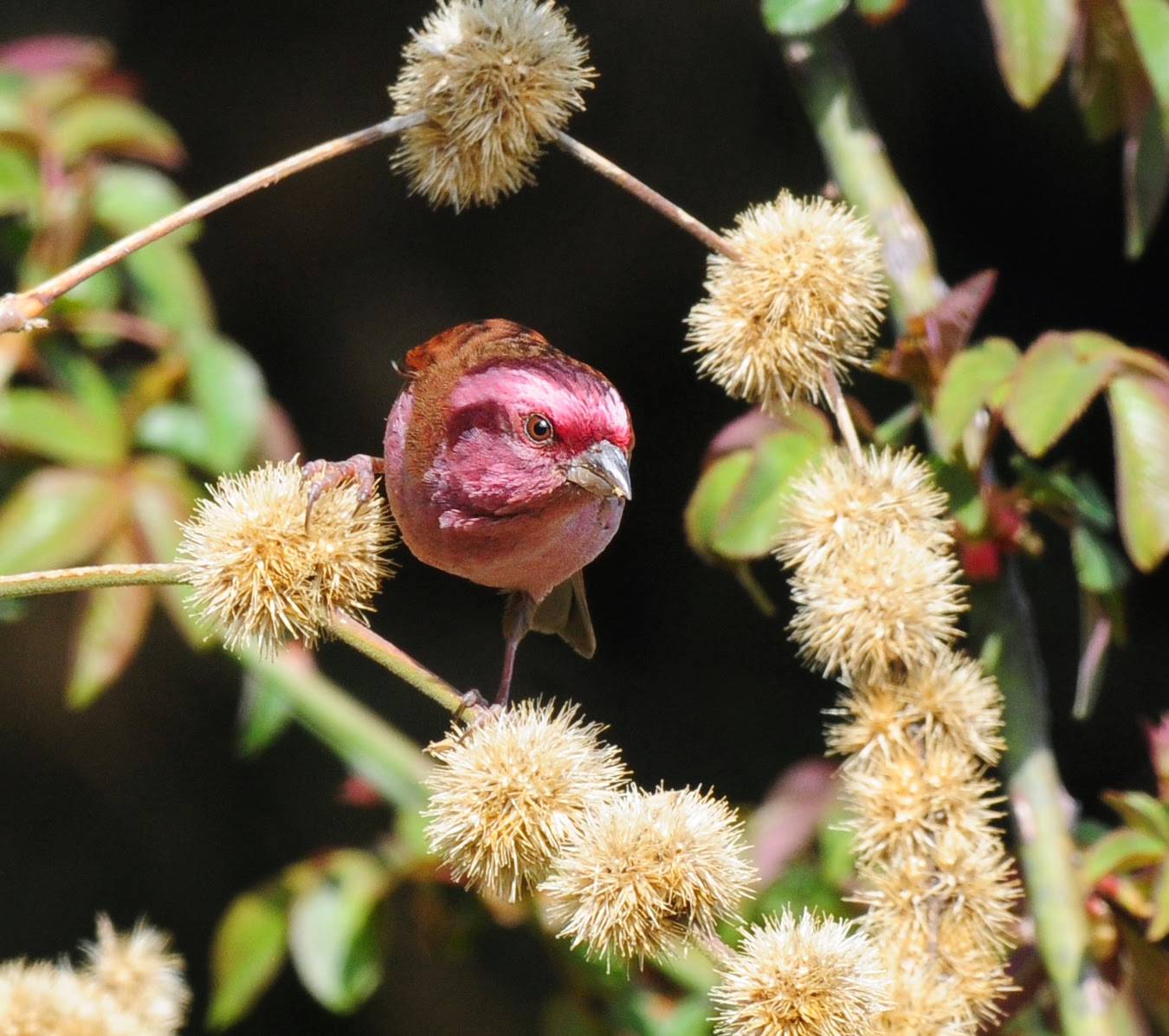 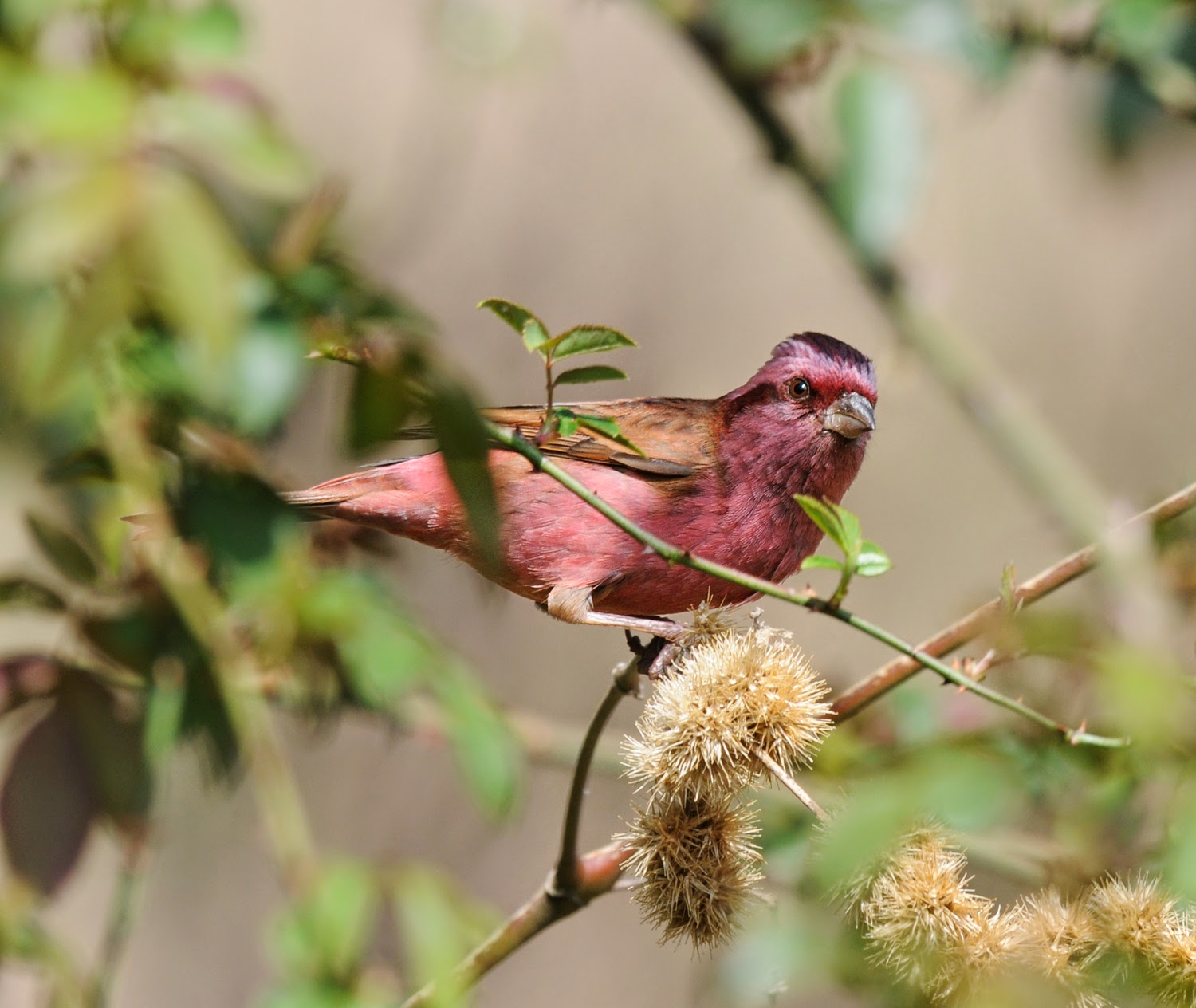 Walking around the gardens we had amazing views of a male Pink-browed Rosefinch, along with Rufous-breasted Accentor, Blue-fronted Redstart, Rufous Sibia, a flyover Mountain Hawk-Eagle, exceptionally close views of Black Eagle, Himalayan Griffon, and Common Rosefinch, but only a couple of us managed to see a huge Spot-winged Grosbeak feeding in a fruiting tree. Hope it will be back tomorrow.....

A short walk into the forest in the late afternoon was rather quiet, although a male Chestnut-bellied Rock-Thrush was nice, as was a Green-backed Tit.

We paid a visit to the boulder-strewn river behind the lodge before breakfast and saw our first Blue Rock Thrush, as well as getting nice views of both Plumbeous and White-capped Water-Redstarts. Back at the lodge there was a male and 2 female White-capped Buntings, which was something of a surprise, along with our first Large Grey Babblers.


A day-roosting scops-owl species looked to me like Indian Scops-owl but I am assured by the local birders that it is Collared Scops-Owl….. Mmmmm…..


So after breakfast we loaded the luggage onto the coach and began the drive up to Pangot, stopping along the way for our first Ruddy Shelducks, Striated Heron, Little Swifts and Streak-throated Swallows – the latter species was scoped when they alighted on a patch of mud to collect material to build their nests with.


Once up in the mighty Himalayas we made our first stop along the road and this turned out to be very productive as we came across several very confiding Grey-hooded Warblers, Russet Sparrow, Ultramarine Flycatcher, Grey-faced and Brown-fronted Woodpeckers, Blyth’s Leaf-Warbler, and a very close Himalayan Black-lored Tit.


The next stop was a little higher up where we saw a close Grey-sided Bush-Warbler, a flock of Black-throated Bushtits, Streaked Laughingthrush, Blue-fronted Redstart and a very interesting warbler that had a long bill and lacked wing-bars - Tytler’s Leaf-Warbler.

Patience is a Virtue...!

We spent the morning on a jeep safari around the grasslands from Dhikala and again went in search of Tiger, but has so often happened during my time this year in India, turned out negatively. There are plenty of Tigers here but we just don’t seem to have the luck with us and I know of at least three other sightings this morning from other jeeps....

But we did enjoy another good run of birds with a superb male White-tailed (Himalayan) Rubythroat sat out singing in the early morning sunshine and this turned out to be our only sighting of the entire tour.

After breakfast we packed up and left on the drive towards civilization, stopping at a forest lodge en-route for lunch. This was in a great location within the forest and of particular note was a Tickell’s Thrush showing nicely around a fruiting tree. Driving out of the park we saw a Besra, several Blue-throated Barbets, Coppersmith Barbet, Himalayan Flameback, Ashy Woodswallow, Large Cuckooshrike, Lemon-rumped Warbler, Rufous-gorgeted Flycatcher, Plumbeous and White-capped Water-Redstarts.

Other goodies seen today included Red-headed Vulture, Western Osprey, Brown Fish-Owl, Fulvous-breasted Woodpecker, Crested Kingfisher, Himalayan Black Bulbul, Rosy Pipit, and some Yellow-eyed Babblers. In the evening I managed to call in a Brown Bobook outside the lodge – which was just one of eight owls seen on this tour.

This turned out to be a very good day indeed, during which we saw an awful lot of really good birds and a few iconic Indian species to boot. We began with a jeep safari taking in the surrounding grassland and forest edge beginning with further views of Large-tailed Nightjar just before boarding our jeeps or as they are called locally - ‘gypsies’. First of all we headed out into the open grassy plain and then along the edge of the huge forest seeing Chestnut-bellied Nuthatch and Grey-capped Pygmy Woodpecker – neither being new but nice views. Many new birds came our way here such as Grey Bushchat, Lesser Yellownape, Fulvous-breasted Woodpecker, Velvet-fronted Nuthatch, Crested Treeswift, Bar-winged Flycatcher-Shrike, Small, Long-tailed, Scarlet and Short-billed Minivets, Common Rosefinch, and a brief Black-throated Thrush. Moving deeper into the forest a Brown Fish-Owl appeared, along with Black-hooded Oriole and Rufous-bellied Niltava. 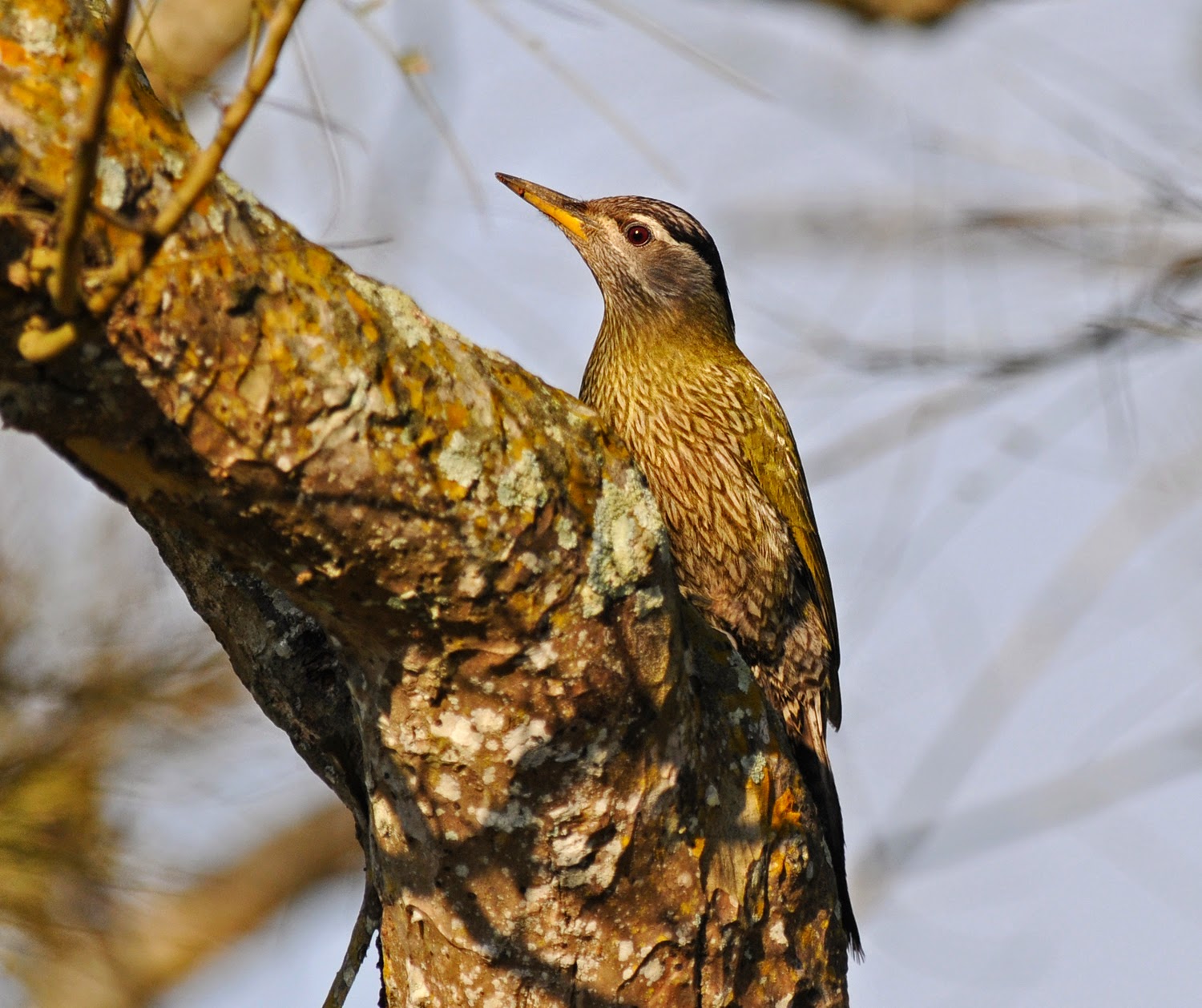 We spent the remainder of the late morning and early afternoon inside the Dhikhala compound and turned up a number of good birds with Indian Grey Hornbill, Crimson Sunbird, Hume’s Warbler, Grey-sided Bush Warbler and Black-chinned Babbler along the perimeter fence.

We also had an amazing run of raptors with Changeable Hawk-Eagle flying over to start with, and then later a kettle of Himalayan Griffons was joined by a Red-headed Vulture, huge Cinereous Vulture and a couple of Egyptian Vultures, with a Pallas’s Fish-Eagle joining in later. After lunch Lynne spotted an adult Cinereous Vulture and 2 Red-headed Vultures with a couple of Steppe Eagles standing around a small carcass on the plain below us. We watched them for quite some time through the scopes and another Cinereous Vulture flew in and landed before all these birds took flight which made for spectacular viewing. A male Crimson Sunbird also gave point-blank views. 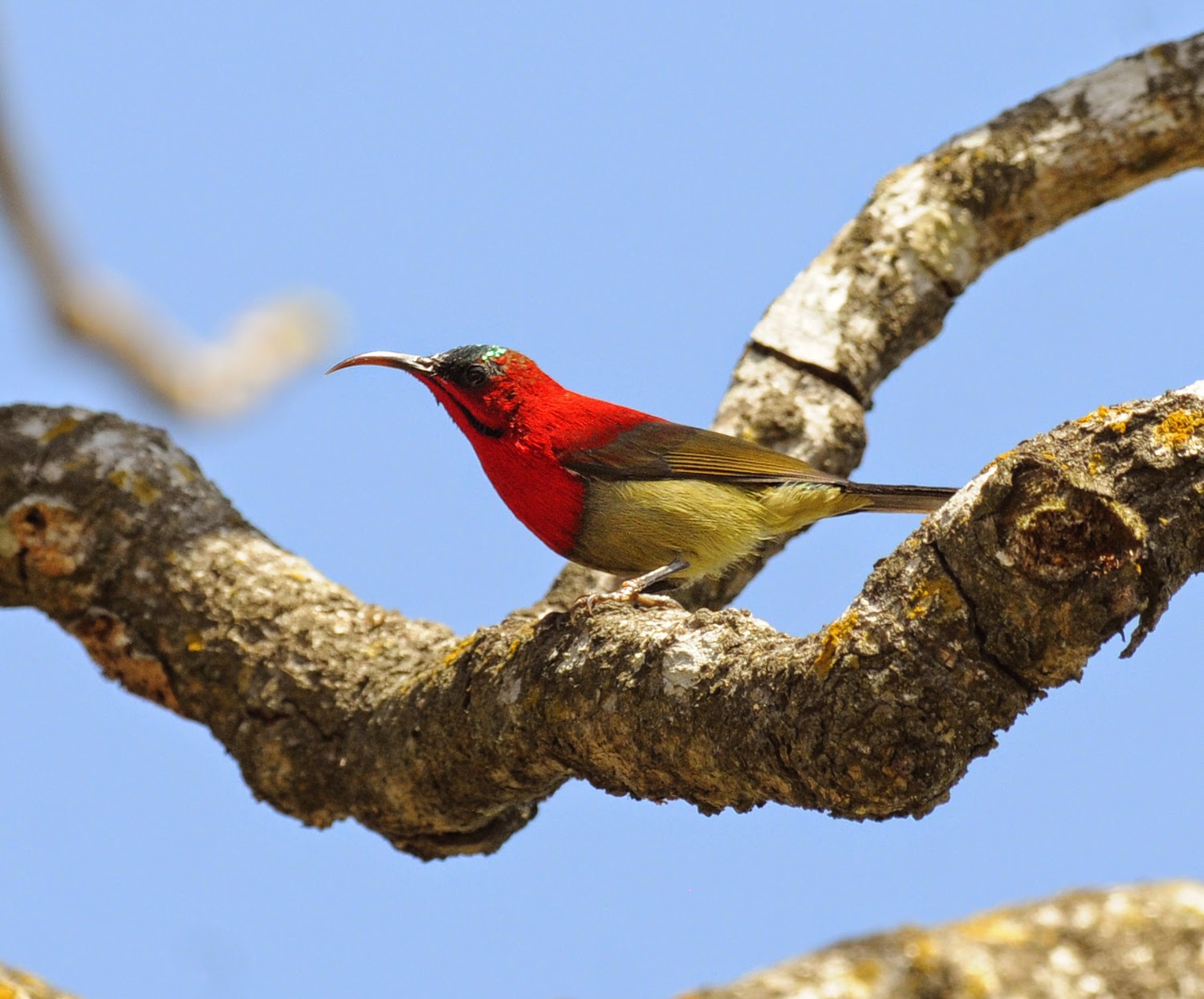 At 2.30pm we headed out in the jeeps for a short jeep safari and didn’t really see anything new but concentrated on looking for a recently reported Tiger, but again without success, although a Lesser Fish-Eagle was new.

We had to sprint to get back to the compound in time for our 4pm Elephant safari and then spent the next two hours chasing after a Tiger that had just been reported. It caused quite some amusement to begin with but once we headed into the jungle and went crashing through the bushes and trees we had to fend off branches before reaching the open grassland. Well I’m very pleased to report we did get to see a young male Tiger that had been hiding in some dense bushes but he quickly ran away and out of view. But smiles all round and a huge weight had been lifted from my shoulders.

On the walk back to camp we saw a Crested Bunting in company with a female Chestnut-eared Bunting to round the day off nicely. That was until our first Jungle Owlet perched out in a bare tree was seen from the viewpoint. What a day!