Early this morning we found ourselves at Offinso Forest, which turned out to be a very good couple of hours birding before the long trek north to Mole National Park. It was very busy with lots of bird activity and we began with displaying Pin-tailed Whydahs, African Grey Woodpecker and Whistling Cisticola perched and in the scope before leaving the parking area. The habitat here is much drier than we’d been used to, with more open forest and secondary growth, subsequently there was a much different suite of birds here. A pair of African Hobbies sat in a large tree looked rather nice through the scopes, whilst a reasonably showy Puvel’s Illadopsis was seen by everyone this time. We followed a wide track further into the forest seeing African Pygmy Kingfisher, Orange-cheeked Waxbill, African Firefinch, Broad-billed Roller, a pair of Black-and-white Flycatchers, Klaas’s Cuckoo and Pied Flycatcher, as well as more commoner species. Then as we rounded a corner an African Civet was walking along in front of us. Unfortunately it had an injured leg and that’s why we had such good views but it was a beautiful animal to watch for a few minutes before it slipped away into the grassland.

At 10am we turned around and headed back to the coach and boy was it hot with the sun beating down on us from a cloudless blue sky. Yet we weren’t finished as we heard the skulky Capuchin Babbler call nearby and after a bit of manoeuvring some of us had a reasonable view. Once they had disappeared we carried on walking with only a Blue-bellied Roller of note before reaching the sanctuary of our air-conditioned coach.

It was a long, tedious drive as we travelled north towards Mole National Park, but also interesting to see how the habitat changes from the wetter forest to more open, bush country the further north we drove. And there were some good birds seen along the road including Black-headed Heron, Bruce’s Green-Pigeon, Abyssinian Roller, Lizard Buzzard, Dark Chanting Goshawk, Grasshopper Buzzard and Long-tailed Glossy Starling to name a few.

At a marshy area we found Yellow-crowned Bishop, Black Crake, flocks of Red-billed Quelea and some cracking African Pygmy Geese. And it was just getting dark as we reached our lodge so we’ll have to wait until the morning to see what the view is like.

Just a short 45 minute drive from our hotel in Kumasi was Bobiri Butterfly Sanctuary, an excellent patch of lowland forest. We walked along the wide track through excellent habitat notching up our first Forest Chestnut-winged Starlings. Then we took quite  a while but eventually tracked down a calling Red Dwarf-Hornbill that had been so good at eluding us, but we got it. As soon as we had scored this cracker, a Red-chested Owlet called from behind us and there it was, perched in the open underneath the canopy of a low tangle of leaves and vines. What a delightful little bird and we were able to watch it at leisure.

Walking further along the track and at long last, the much-wanted Long-tailed Hawk flew across in front of us, before circling us a few times. It only gave flight views but what an exquisite bird with an extraordinarily long tail as its name suggests! We also had Cameroon Sombre Greenbul, African Cuckoo-Hawk and White-crested Hornbill. We also came across a few mixed feeding flocks, with old friends such as Sabine’s Puffback, Chestnut-capped Flycatcher, Yellow-mantled and Preuss’s Weavers, Western Black-hooded Oriole etc. We also tried calling in Brown Illadopsis without luck, and also only heard Buff-spotted Woodpecker, Magpie Mannikin and Afep Pigeon. Diving out of the forest a Blue-billed Firefinch, Pin-tailed Whydah, Bronze Mannikin and Wilson’s Indigobird were seen.

After lunch we returned to the forest in the late afternoon and turned up a few corkers. We saw a couple of Brown-necked Parrots flying low over the canopy and a fine African Grey Parrot flying past us as well. Then, as we were walking along the track at about 5pm a large bird walked across in front of us in a shady section under some bamboo – Nkulengu Rail..!!! I think it was true to say everyone was stunned, when we realised what we had just seen. A mega tick! And then at dusk we spotlighted a surprisingly small Brown Nightjar flying through the trees and over our heads to round off a quality afternoon session.

Ghana Day 8: Day of the Picathartes

We had a few hours to check out the Abrafo section of Kakum NP again. A Red-faced Cisticola showed well, and there were numerous White-throated Bee-eaters with several flocks flying around, with some perching in full view nearby.

And a Yellow-rumped Tinkerbird also posed nicely over the track.

But we spent probably way too long trying to get decent views of Red-cheeked Wattle-eye that seemed to have knack of eluding us pretty much every time we thought it was just about to come into view. A few of the group had reasonable sightings but it wasn’t a satisfactory experience overall. But what a stunning little bird! There was also a few other previously seen species such as Black Bee-eater…..

However, we were all distracted somewhat by the afternoon’s excursion to see Yellow-headed Picathartes. Arriving at the village around 2.15pm we walked through the nearby forest and up a steep trail into the hills, which took us about half an hour. Upon arrival we positioned ourselves on the bamboo benches and waited. Well we didn’t have too long to wait as within fifteen minutes this much-wanted species came into view and we spent a fantastically enjoyable half an hour watching it preening, stretching and feeding about 30 yards in front of us. What a bird this is and one of the highlights of most people’s birding career. 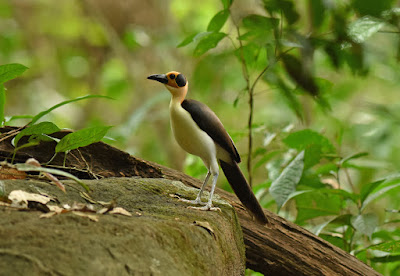 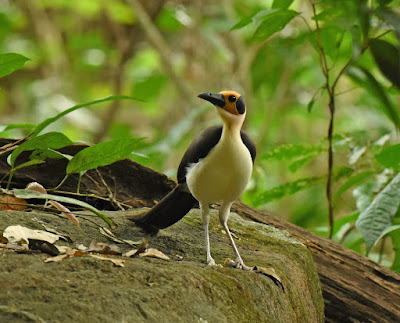 We took the riverside trail near camp this morning and the highlight was a fantastic Yellow-throated Cuckoo teed up in the scope – such a scarce bird and very poorly known.

A flock high up in the canopy held several Yellow-bearded Greenbuls and a Shining Drongo, whilst Rufous-winged Illadopsis and White-tailed Ant-Thrush were only heard. After this little rush of new birds there wasn’t anything else to report and after walking a few kilometres along the main track we returned to camp early and packed our belongings in readiness for our journey back to the Rainforest Lodge at Kakum. Over lunch, Richard found an antswarm which held several White-tailed Alethe, Rufous-winged Illadopsis and even a skulking Nkulengu Rail, a Shining-blue Kingfisher was seen by a few of us, whilst John saw a White-bellied Kingfisher along the stream, as the rest of us were drinking coffee back at camp! After lunch we left Ankasa and saw Both Reichenbach’s and Brown Sunbirds at the usual stake-out. The drive to Rainforest Lodge at Jukwa gave us our first Red-necked Buzzard of the tour.

Our full day in Ankasa forest was a little disappointing as bird activity was very low and most of the birds weren’t tape responsive at all. However, a number of new birds were nailed and we began with a few Blue-headed Wood-Doves along the track as we drove around 7 kilometres deeper into the forest in a couple of jeeps. As we began walking a pair of Western Bearded Greenbuls showed reasonably well before we reached the first pond. Here a White-bellied Kingfisher was present but not seen by everyone and a Yellow-billed Turaco called overhead. Further on a pair of Hartlaub’s Ducks flew off as we reached the second pond and then from here an uphill walk took us to an open area where a Western Bronze-naped Pigeon was scoped. The third pond didn’t have anything to note so we walked back, and then spent quite a long time trying to get on a calling Red-billed Dwarf Hornbill. It was calling from the canopy of a huge tree but several of the group caught a sight of it before it flew away.

We were having lunch brought to us at the old camp and along the way a Black-throated Coucal flew across the track in front of us, and a Blue-throated Roller was scoped on some pylons. We rested for several hours over lunch and then walked back to the ponds but the afternoon was even quieter, although a few people caught up with a White-tailed Alethe that a few of us had seen earlier.

Here's a couple pics of our camp at Ankasa. Hopefully from next year the new lodge Ashanti are building at the entrance to the forest will be ready - so no need to camp anymore. 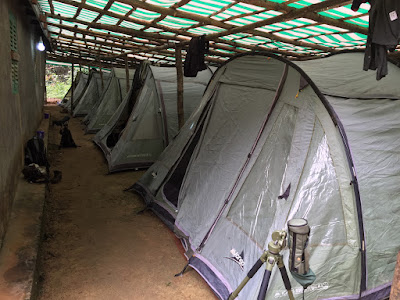 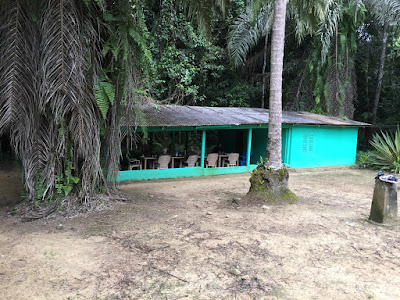 Back near our camp at the river a Shining-blue Kingfisher appeared again and a Giant Kingfisher was seen by Ron. After dinner an African Wood Owl was spotlighted at the edge of camp and was a great way to end the day.